I found out today on the growing Mongol Rally Forum about the rather terrifying Mongolian Death Worm, reported to live in the Gobi Desert. At 1.5m long and possessing a ready supply of sulphuric acid to burn its victims before it drinks their blood, it doesn’t look nearly so cuddly as, say, Paddington.

However, I find myself wondering, how deadly really is this beastie? To find out, let’s have a bit of a comparison, between the aforementioned Mongolian Death Worm and the most fearsome creature mainland Britain can offer up – the Greater Spotted Midlands Chav. The worm could be considered impervious to attack, being both strong and fast. It has also been suggested that it can electrocute its victims to death as a nice change from burning them. However, what it gains in viciousness it loses in enthusiasm: not a single injury has been chalked up to the Death Worm for years, whereas go out in Coventry late at night with your mobile on display and you’re in line for a shoeing. What the chavs lack in sulphuric acid and supercapacitors, they make up for in belligerence, mindless aggression and sheer numbers.

There is no empirical evidence to suggest the presence of any chinks in the Death Worm’s armoury. Try and run it over and it will melt your tyres, and subsequently your face, with acid; try and spray it with bug spray and it is likely as not to take it off you and shove it where, even in the Gobi Desert, the sun is unlikely to shine. Both of these defences are effective against the Greater Spotted Midlands Chav – however, a far more apparent weakness lies in cheap, fluorescent alcoholic beverages. Whilst a steady flow of these will actually increase the danger for the reasons mentioned above, before long the attack will be nixed by means of the perpetrator passing out in a bus shelter.

This is the category where the Greater Spotted Midlands Chav takes a strong lead, being almost omnipresent in the provincial towns of the Midlands. Meanwhile, whilst the existence of the Mongolian Death Worm has never actually been disproven, nobody’s actually managed to take a photograph either*. Perhaps they were too busy being killed to death, or perhaps he’s shy. In any case, there’s between none and one of the blighters, meaning that the prize for terror in this category must go to the home team.

*Hence the somewhat terrifying but definitely blurry image above: I suppose it must be hard to do accurate brush-strokes when you're being electrified, dissolved and eaten all at the same time.

Likelihood to vandalise your Reliant Rialto:

This final category could be the clincher. As the Rialto has a fibreglass body, it is likely* to be quite resistant to the sulphuric acid which would quickly take the lustre off a metallic paintjob. For the same reason, the Worm’s electrocution attack will be blunted, and with a 2200mm wheelbase, the Reliant could be a smidgen long for the Worm to swallow whole. The chavs, meanwhile, will use their only major advantage over the worm – opposable thumbs – to bring every implement they can lay their hands on to bear against the defenceless Tamworth tricycle. This is especially worrying if, like us, you’re going to be transporting your Rialto to Coventry this weekend; and more worrying still if that Rialto has no side window and only a rudimentary ignition barrel.

*based on no knowledge whatsoever.

Whilst the Mongolian Death Worm may be fearsome, it will be a breath of fresh air (laced with H2SO4) compared to the Greater Spotted Midlands Chav. Let’s just hope that we can fend off the menace of the latter before we head for the relative safety of the Gobi Desert in July!

Posted by Russell Gowers at 04:29 No comments: 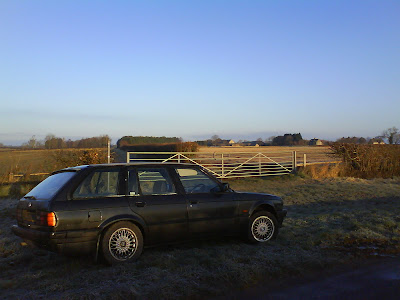 “It’ll be fine.” Possibly the three most dangerous words in the English language. You use them when you’re busy ignoring everything that your intuition is screaming at you and, whilst nine times out of ten, ‘it’ really WILL be fine, that tenth time can often prove to be expensive.

My “It’ll be fine” comeuppance was delivered on Christmas Day when I left the fascia attached to the rather nice Pioneer stereo in my newly acquired BMW E30. Realising that this left the car as a somewhat tempting target for vandals, I thought long and hard about venturing out into the cold to remove the fascia. Then I had another beer.

By Boxing Day morning, the car was gone.

They found it not twenty-four hours later, minus stereo, on a garage forecourt, with two lads trying industriously to steal more cars. Presumably, it had taken about that long to discover that a 1.8 8v, 189,000 miles and a heavy Touring bodyshell don’t make for the ideal getaway car… but I digress.

The car was recovered by Mansfield Group, a vehicle recovery sub-contractor tasked by the North Staffordshire police with securing any stolen or burned-out cars in the region. “Great!” I thought, when I was told the news, “I’ll simply pop in, collect my car, and see about repairing the damage.” Oh no I wouldn’t – not without paying the £150 recovery charge first. Oh, and the Scene of Crime Officer had to examine the car - he’d not be available until Monday - and there was a £12 per day “storage fee”.

Now, I appreciate that the recovery of vehicles is not a cheap operation. I further recognise that police budgets are stretched. But since when has policing been “pay-as-you-play”? And why, if we’re going down that route, doesn’t someone OTHER THAN THE VICTIM have to pay for it? “Well, it’s policy”, was the best response I could ascertain from North Staffs Police but it is a policy that seems utterly, utterly unfair.

It is also, arguably, unlawful. After all, they are providing a service which I could have procured by myself, either cheaply or (via the RAC) free. They have provided this service without my knowledge or agreement and then sent me the bill. Come on, at £150 for a tow of just under ten miles, I could probably have procured Elton John to drive the tow-truck.

Angry with the police, I set about claiming on my insurance, which was a TPFT policy with the people who wish to “Quote You Happy.” It transpired, though, that making a claim would double my resultant premiums and I’d also have to pay a £250 excess. This meant that a settlement figure on my car would have to be more than £850 for me not to make a loss, let alone get any money towards repairing my car. How likely was this, I asked? “We can’t say without sending an assessor, sir,” they responded. And you can’t have an assessor sent out without making a claim. My future finances thus depended on a gamble and, having tried my luck once this holiday and lost, big time, I was reluctant to take a second chance.

At this stage, I doubt they would be quoting me anywhere for fear of breaching OFCOM rules on offensive language.

My options, then, were threefold. Choice one: claim on the insurance, pay out £850, and hope the car was valued at more than £850, then spend the difference on the repairs (bearing in mind market value for my car was £750, and I’d paid just £550 for it). Choice two: pay for the repairs myself and stump up for the police fee myself too (which, by this time, had reached £210). Choice 3: Mansfield offered to waive the recovery charge if they were allowed to “dispose of” the vehicle themselves - after careful consideration, this turned out to be the simplest and least expensive option.

So a mint condition (well, it was before it was stolen) rare, very late BMW E30 is going to the crusher because of a combination of an unfair police policy and an even more unfair insurance policy. Of course, it is sour grapes to cry foul now, and I accept at least partial blame for leaving valuables on display. However, the feeling of helplessness, of having nowhere to turn, has been one of the least pleasant experiences of my life and one which I can’t help feeling that I don’t quite deserve.

So here’s a tip. Check your car security, check it again… and then check it a third time. Remove your SatNav holder before you leave the car and make sure you wipe off the tell-tale mark it leaves on the windscreen too. Buy a Crook-Lock. And for God’s sake make sure your No Claims Bonus is protected. In other words, do all the things you’ve always considered doing, but have dismissed as too much hassle. “It’ll be fine…” you’ll have thought.

It won’t be fine. It’ll be expensive.

Posted by Russell Gowers at 14:45 No comments: