From the Mongol Rally blog: "Don't Keep Me In Suspense" 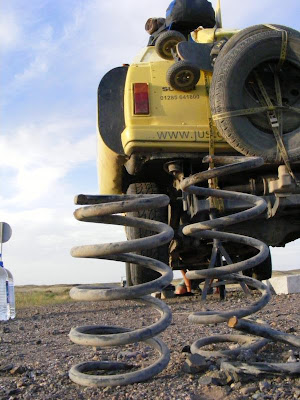 Well, sort of. The car still sits right on its arse, but the transformation over the bumpy roads has been incredible. Who would have known that a tiny garage in a two-thirds-of-a-horse town like Ayakoz would keep, as its only spare part, a pair of springs that only needed a bit of hacksaw-based adjustment to be a perfect fit on our car? And who could have predicted that they'd relieve us of just $25 for the privilege?

So with our new Audi-based suspension system, we have been transformed (as Pepe put it) from the QE2 to a Q7. We glide over the "undulations" in Kazakh roads (some of which are up to 6 foot deep, you could lose Tom in them easily) with the greatest of ease, and consequently have been making swift progress since Almaty.

Kazakhstan is notable for a select group of things. Firstly, the women are almost all drop-dead gorgeous, knocking the female population of Hungary into a distant second place (although obviously neither Usget nor Pepe noticed this themselves, it had to be pointed out to them). Secondly, there's often more than 100 miles between villages, which can become boring. Thirdly, as previously mentioned, some of their roads are utterly, utterly appalling. And finally, the population of Semey were some of the friendliest people we've met since leaving Iran - parking our cars up in front of the park led to an all-out assault by balloon sellers, ice cream vendors and passers-by, all wanting to try out their English, have photos taken with the cars, and give us gifts. Two hours later we finally managed to drag ourselves away, not wanting to see candy-floss again as long as we all lived. 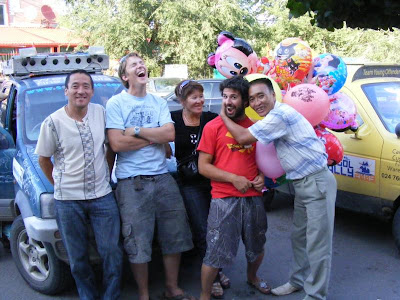 Incidentally, Pepe and Tom claimed that wolves came around our tents that evening. James and Usget heard nothing, and don't believe them.

From Semey we headed over the Russian border, where we met a couple of Romanian bikers who were quality, and which was, in border terms, painless (and free!) Russia itself has so far proved to be quite a lot like England - bloody cold, rainy (we're at 53 degrees North, our most Northerly point on the trip), and difficult to get things done. Barnaul, though, has been a bit of an improvement: it's a sprawling great university city with a young population and plenty of shops, bars, and indeed a solitary Net cafe (from whence we write). We'll not be spending much time here, though, because it's a bloody long way to the Mongolian border and The Adventurists website is already expressing incredulity that anyone should still be on the road...

8 days to go, and this may be the last full blog until UB. Wish us luck everybody.