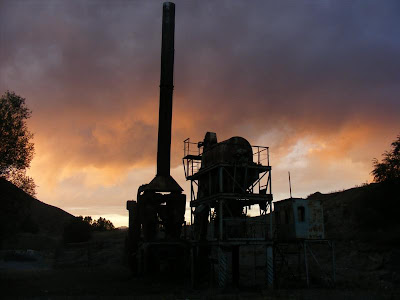 Just a quick update because it's only 2 days since the last one. But it's worth noting that we managed to cover 400 miles in a single day! Our biggest day since Munich, way back in mid-July.

Kyrgyzs roads (the ones that they've finished) are brilliant, alternating between arrow-straight stretches of fast, wide blacktop and sinewy passes that wind their way through the (copious) hills. Even better, we managed to find some 95RON fuel in Osh, so we did the whole thing without Jenny rattling complaints at us with every dab of the accelerator.

On the road, we finally run out of luck with the tactic which has seen us avoid police bribery-points since Iran; ie, pretend to pull over, make sure they don't have guns, then drive off. On the whole, this has been remarkably successful, with nothing more than a succession of confused-looking coppers to our name, and only a handful of bribery attempts (in Tajikistan, where they had barriers across the road). The Kyrgyzs 5-0, however, are far more prevalent and have radar guns, so Pepe and Usget got one tug each. Usget got out of his ticket by pleading ignorance of the 60kph limit - this wasn't hard, since there were no signs whatsoever - and Pepe's "fine" started at 300 Som ($7.50), came down to 200 Som ($5), then a spare wheel, then a tyre... then a cigarrette (of which we've kept a stash in the glovebox for just such an occasion). When he offered to pay the fine in Bishkek (ie through the official channels, rather than into the top pocket) the policeman gave up and sent us packing... a bit more warily than before.

Bishkek is a bit of a hidden gem: the guide book isn't wholly complimentary about it but we've found it to be leafy and pleasant, a bit like Cheltenham. But then all of these former Soviet capitals are leafy and pleasant and a bit like Cheltenham. For the people who supposedly have the lowest average wage of all the Cental Asian countries, the Kyrgyzs dress incredibly stylishly, and Pepe (with his beard now at hobo-rivalling standard) and Usget (with his two-weeks-and-counting shorts and gay cowboy hat) have been on the receiving end of some incredulous, disparaging looks. Also, Bishkek's residents all drive either big 1990s German saloons (we went in a BMW 525i taxi last night, after evicting a prostitute from same) or right-hand-drive Japanese imports. It's probably the most Western-feeling city we've been to since Budapest, in fact.

We are now working out what to do with our three spare days before meeting HTMT in Almaty, just 200km away. The favourite option seems to be white-water rafting, but Usget's belly currently feels like he is white water rafting whilst sat in an Internet Cafe, so this might not be the safest of options.

1500 miles until Mongolia and 2500 until Ulaan Bataar (so long as the bits which sound like they're about to fail - rear springs, brakes, catylitic converter - don't.)