From the Mongol Rally blog: "Drive Me To The Moon And Back" 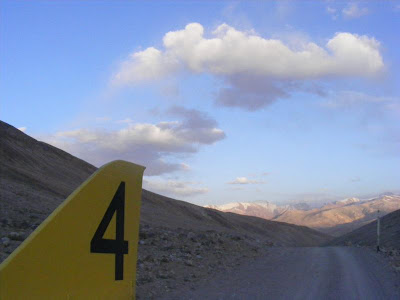 We're finally back in civilisation after a week in Tajikistan. In brief, a creepy German doctor in Dushanbe cured Usget but appeared to want to take over ze vorld. Once that important aspect was sorted, we headed out into Tajikistan itself, which is an utter moonscape. Sometimes there are 100km between villages, and most of the plateau is above 4000m - no wonder Soviet Cosmonauts used to use it to train for their space missions.

A lot of our journey was undertaken following the Afghan border, which was beautiful, if deserted. A fantastic side-effect of this was that we got to meet the lads at FSD, a Franco-German mission to clear Russian mines from the Tajik-Afghan border using Tajik troops. When we rocked up in Thunderbird Four, they bloody loved it, giving us Plov, Choy (complete with the biggest sugar lumps in the world - Pepe now has a habit and needs a trip to the Priory) and even gave up their tent so that we could have a place to sleep! In one of the strangest nights of the trip, we were first given a showing of the worst German porn in the world, and then woken at 4am as they'd realised they'd given us their prayer tent to sleep in! Weird, but they're doing a damn good job - the sooner Tajikistan is rid of these hideously archaic weapons, the better.

Other adventures from Tajikistan are few and far between - the country has mindblowing views, but little else! The boneshaking roads have killed an indicator and our driver's window, and on one particularly well-hidden pothole Pepe managed to launch the whole car off the ground and snap a spring (it's probably only fair to point out that Usget did pretty much the same thing 4 hours later, so the spring would have gone at some time!) Despite these issues, and our tortured brakes, and the 80-RON fuel (for the uneducated, you'd run a tractor or possibly a lawnmower on 80-RON fuel) Jenny managed to climb the highest pass you can take an English registered car on - the 4655m Ak Baital. We're proud of her. 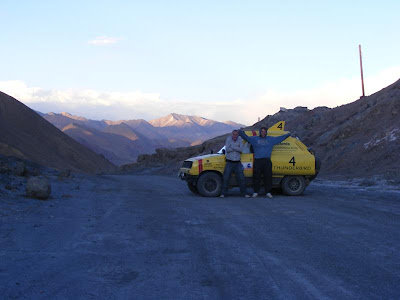 (Note to Suzuki, though: 4wd vacuum hubs don't work at over 4000m altitude, which is a bit tricky when you've built a campsite on a sandy bit and can't get out again in the morning. Bastard thing.)

We're currently running two days ahead of schedule, so before we meet up with Tom and James in Almaty we're planning to do a couple of car modifications in Bishkek. We're hoping to remove the catylitic converter, so that Jenny accepts the shitty fuel a bit more readily; and we need to find some brake pads which will fit, as ours currently sound like a tribe of banshees on a rusty railway engine and won't last much longer. If we accomplish all that easily enough, we might have a crack at white-water rafting in one of Kyrgyzstan's many excellent rivers.

Kyrgyzstan is beautiful, we've had a good meal and a good explore of Osh, we're loaded up to the gunwales with 95-RON fuel, Jenny's running well, and we're just days away from reunification with Team HTMT. TYO are flying along!

P.S. The finish line party in Ulaan Baatar was today. We're still about 3000 miles away. Whoops!